The museum’s collection includes artifacts that tell the stories of several families that have had an impact on the region. 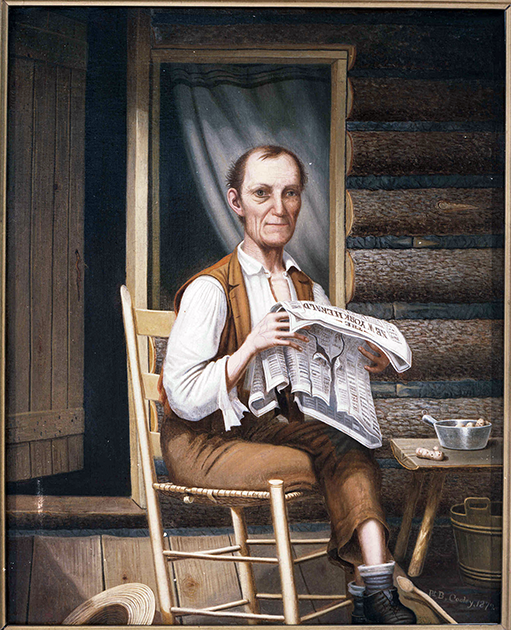 Titus Bronson was born in Middlebury, Connecticut, in November of 1788. Bronson moved west to Ohio in 1821 and continued on to Ann Arbor, Michigan, in 1824. After additional travels back to his hometown, Bronson returned to the Ann Arbor area and then continued west, following a Native American trail to the river valley area that would one day be known as Kalamazoo. Bronson arrived in the area on June 21, 1829, marking the arrival of the first white settler.

He constructed a crude hut of tamarack poles and proceeded to spend the summer preparing to establish a permanent settlement. One year later, after having returned home to bring his friends, his wife, Sally, and other family back to Michigan, Bronson bought land where downtown Kalamazoo is now located. His brother-in-law, Stephen Richardson, officially requested the area be known as the Village of Bronson at the court register’s office in March of 1831. Two weeks later, Governor Lewis Cass selected the new Village of Bronson as the site of the county seat, which encouraged the development of the little community.

Titus Bronson donated some of his own land for the construction of a courthouse, churches, an academy and a jail. Eventually, the academy and jail became the location for a park which still bears his name today, Bronson Park. Titus Bronson was a spirited, patriotic and generous man, but he also was outspoken against indulgences and politics, which frequently put him at odds with his fellow settlers. In March of 1836, those who opposed Bronson and his eclectic ways succeeded in changing the name of the village from Bronson to Kalamazoo. Titus Bronson found the rapidly growing community too constricting, and, having been hurt by the opposition to his connection to the village’s name, he decided to leave Kalamazoo. He wound up in Davenport, Iowa, where he lost his wealth through a land swindle in 1842, the same year his wife, Sally, passed away. Bronson eventually returned to Connecticut and died a broken man in January 1853. Despite Titus Bronson’s personal flaws and eccentric behavior, he nonetheless played a critical role in the founding and early development of Kalamazoo. 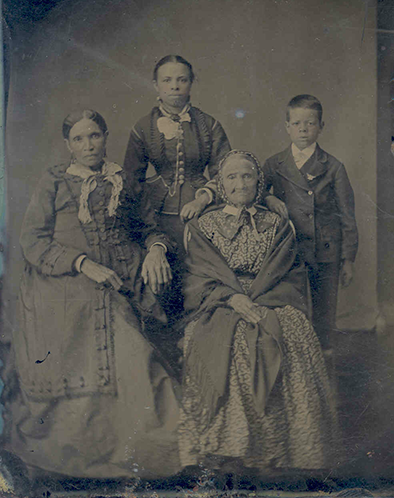 Among the earliest pioneers in Oshtemo Township, a settlement just west of what was then known as the Village of Bronson and what would later become the city of Kalamazoo, were Enoch and Deborah Harris and family, the first Black settlers in Kalamazoo County. Enoch was born in 1775 in Virginia, and his wife, Deborah, was born in 1793 in Pennsylvania. The family initially settled in Ohio around 1810. Moving westward with the advancing frontier, the Harris family claimed land in Southwest Michigan in 1831. Early accounts say that Harris planted the first apple orchard in the area. Records also indicate that their daughter, Louisa, was the township’s first bride, marrying Henry Powers in 1836.

By 1850, the agricultural census shows that Enoch had 180 developed acres and 80 undeveloped acres, along with 3 horses, 3 milk cows, 20 other cattle, 20 sheep and 20 swine. Over the next ten years, Enoch Harris continued to work the land, and the 1860 agricultural census showed that the value of his land had doubled to $8,000, while his personal estate was worth $635.

According to the History of Kalamazoo County, Michigan, written in 1880, “Mr. Harris was not only the possessor of considerable land, but contributed greatly by his labor and energy to the progress and growth of the township. He brought apple-seed with him and planted an orchard, which is probably the oldest in the county. After a long life of toil, he died several years since. His widow still occupies the homestead.” Enoch died in 1870 on his farm in Oshtemo Township at the age of 85, and his wife, Deborah, passed away in 1881. Both are buried in Genesee Prairie Cemetery in Oshtemo Township, and until 2006, the original Harris home stood as a marker of one of the earliest family settlements in Kalamazoo County.

On July 10, 1958, the Detroit Free Press newspaper featured a small article: “Welcomed to Michigan recently was Miss Elita Krasts, daughter of Mr. and Mrs. Edgars Krasts, of 715 Pioneer, Kalamazoo. The Krasts left their native Latvia for Germany in 1944, when the Russians invaded their country. The parents came to Michigan in 1951, sponsored by the Paw Paw Methodist Church, but Elita was refused admission [into the country] because of illness. Some 18 months ago she was certified as well enough to come to America and it has taken that long to unwind the red tape.”

The Krasts family story is one that reveals an all too common immigration experience – the division of families. After World War II, many Latvian families fled their country after the German and Soviet takeovers and found themselves living in Displaced Persons camps in Europe. Latvian-born Reverend Janis Laupmanis helped many Lativian families come to America, including the Krasts family. In a letter written on October 11, 1949, Rev. Laupmanis wrote to the Krasts family with the news that they would be traveling to America. “I am very glad to enclose in this letter a copy of papers which have been made out for you in Lawton, Michigan, not far from Kalamazoo.”

However, the Krasts came to Kalamazoo in 1951 with only one of their two children. Their daughter Elita had contracted tuberculosis in the Displaced Persons camp in Europe and was denied travel and entry to the United States due to her poor health. For seven long years Edgars Krasts wrote letters trying to enlist help in reuniting his family. Finally, in 1958, Elita was allowed to travel to the United States to be with her family. Elita’s arrival at Kalamazoo’s train station was covered in both local and international newspapers, including in the Latvian paper “Laiks.”

During her time in Germany, she met her future husband, Ojars Berzins. After immigrating to the United States, they married and settled in Indianapolis, Indiana, where they raised three children, Ojars, Ilze and Andris. Elita was active in the Latvian community and a member of the Latvian Lutheran Church, the Latvian Welfare Association Daugavas Vanagi, and the Latvian Community Center Women's Auxiliary. Elita passed away on March 9, 2021 at the age of 90.